Romanians and Bulgarians coming to Briton.

Briton has open its doors to Romanians and Bulgarians and thousands are expected to come here over the next few months. The first coaches left on the 31st December for a three day journey.

People from the coaches were interviewed before leaving, most of the people were coming to work. But  a lot said they were only coming to beg and claim benefits also some said that they were coming to rob, pickpocket and steal metal for scrap. A woman 65 said she will beg with a sign saying she needs an operation for cancer, how sick is that. 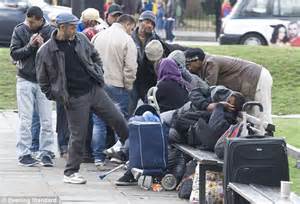 A man said he was only coming here to rob and pickpocket and he was bringing his son who he was teaching to do the same thing.

The people of Briton need to be more careful with their bags, phones and other personal items and of-coarse their homes, these are the things they are most interested in and where the most money is to be made.

The photos above show how London is now what will it be like when the country is flooded by them. Even when they are caught robbing or another crime they are set free instead of being sent home, human rights of-coarse.

Thank God we do not have a problem in Northern Ireland with only a few in Belfast and very few people give money to them, so we are seeing fewer of them about.

Don’t give money to foreign beggars no matter how bad or how poor they look, do you think they dress and look like that when they go back home, i’m 100% sure they do not.

18 responses to “Romanians and Bulgarians coming to Briton.”