World’s fattest man is revealed to be British and weighs 58 stone.

I hate what I have done to myself. 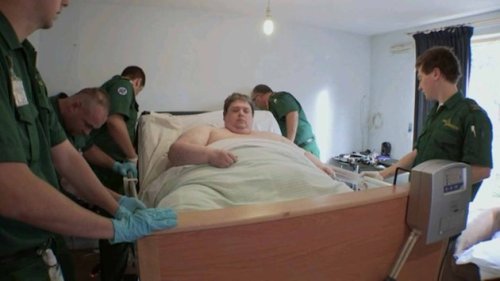 Pictured is Briton Keith Martin, 42, who has been named the world’s fattest man at 58 stone.   Photo from : Channel 5 News.   Story from Yahoo news.

The round-the-clock care Mr Martin needs is to be shown in a documentary which will be screened later this month. Because his health is so fragile he has a team of 18 people looking after him – including his sisters, nurses and ambulance staff.With a 6ft waist the former warehouseman, 42, is now wider than his 5ft 9in height.Mr Martin’s daily diet includes eight hotdogs and ham sandwiches for breakfast, a selection of chocolate bars and biscuits for lunch and two roast dinners with a whole bag of oven chips, the Daily Mail reports.

He spends the day watching TV leaving his bed only for vital health check-ups.

Mr Martin is one of a million Britons who have developed the lethal condition which was triggered following the death of his mother.

Mr Martin told Channel 5: “My mother died when I was 16 and I didn’t care about anything after that and I couldn’t care less about what happened to me – I ate anything and everything,” the Mail quoted him as saying.

“I blame myself. It was my fault and I hate what I have done to myself.”

[See also: The real reason why Brits are overweight]

During the first episode of ‘Big Body Squad’ on Channel 5, viewers will learn how his army of carers battle to get his sheer frame home following a stay in hospital.

The series aims to raise awareness of the plight of those who suffer from being extremely overweight.

30 responses to “The World’s fattest man.”